(May 2008) We've been hard at work with our development partner, Mercury Development to bring you the next release of PopMonger! PopMonger 4 is an entirely new codebase, and will be the framework for Mach5 Mailer 5 which will be released later this year. We've integrated the entire application into one window, with similarities to Outlook 2007, and added more capabilities than we can even mention. Let us know what you think of the new look! Email us at: popmonger4@(no-spam)mach5.com, with the (no-spam) removed. - Mach5 Management 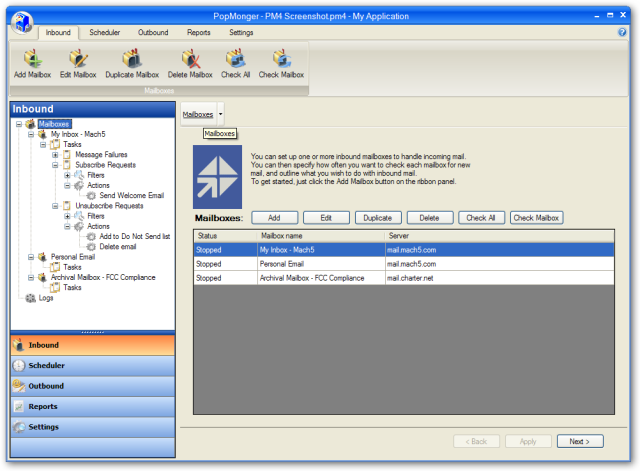 (December 2007) We hope you like the new look of Mach5.com as much as we do! We finally queued up with the rest of the net and moved to a static width layout. Its much more legible on widescreen LCD's which are so prevalent these days. (We all use them.) If you notice any bugs on the site, please let us know! management at mach5.com

PS. Happy Holidays from all of us at Mach5 Development

PPS. We hope to have a New Years surprise for you in early January!

We ask that all customers who were affected by this outage either submit new Support requests, or respond again to their existing Tickets. We sincerely apologize for this error and understand the severity of the outage. We will do whatever we can to respond to your questions going forward.

What's Coming and Who's Going

(July 2007) Mach5 Development has been busy all July with staffing changes including one partner leaving Mach5 for a job at his Alma Mater. We wish you all the best Sloan. Mike Landis has replaced Sloan as Lead Programmer for Mach5 Development and Owen Cauley has stepped into his role as Manager. During this change we have streamlined our company and refocused our efforts on providing great software at an affordable price.

To give you an idea of the changes coming at Mach5, you can look forward to a completely rewritten PopMonger later this year (we've got an Alpha version up and running already) with a brand new sticky, friendly, simple and powerful interface. The new GUI will also be the container for a future release of Mach5 Mailer 5. We've focused primarily on the power of our software and we're looking forward to unlocking that complexity for our customers through better interfaces.

Mach5 FastStats Analyzer 5 has been in the queue for a year now and we hope to have it out at the end of the calendar year. FastStats 5 will feature a completely rewritten report export capability with Ajax style webpages for quicker navigation, other changes include a new Advertising feature with Campaigns and Goals to track PPC and Banner Advertising effectiveness on your website.

(June 14, 2007) Continuing our dedication to our customers, we have released Mach5 Mailer 4.5.0.4 with two user requested features

(June 10, 2007) Mach5 Development moved its server to a virtualized hosting environment 6 months ago. The machine hosting us has recently caused some of our pages, specifically our purchase and download pages, to lag. To prevent this from happening, we have upgraded our server to a non-shared environment.

We now have a dedicated dual-core machine which should remove all of the slowdowns from our site. If you experience any slowdown's or difficulty accessing our site, please email us: support -at- mach5.com

(May 20, 2007) Following quickly on the heels of Mailer 4.5.0.2, this release fixes many issues with various data sources. The full changelog and direct download are available on the Mach5 Mailer Version History page.

(May 10, 2007) A quick bugfix release, Mach5 Mailer 4.5.0.2 fixes a few bugs introduced with Mailer 4.5 and adds additional features. The full changelog and direct download are available on the Mach5 Mailer Version History page.